This year could ring in big changes for those of you who smoke e-cigarettes.

From May, laws will be standardised across the EU restricting how large their liquid containers can be and how much nicotine they can contain.

Restrictions on advertising will also come in.

Politicians have been grappling for ages about how to deal with e-cigarettes, and whether they could serve as a ‘gateway’ to smoking actual cigarettes.

Opponents say they are a helpful tool for people quitting smoking and should be promoted. 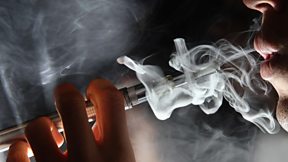 In the UK, the new laws mean there will be tighter rules on what products you can buy but in other countries the laws will actually be loosened.

For example, they are currently banned in Belgium but from May will be permitted again.

Refill containers will have to be no larger than 10ml while cartridges will have a maximum size of 2ml.

The strongest permissible nicotine strength will be set at 20mg (similar to a strong cigarette).

If three or more EU countries decide e-cigarettes are harmful, they could potentially be banned outright.

Some new laws have already been passed in the UK, such as a ban on selling e-cigarettes or e-liquids to anyone under the age of 18 which came into force in October last year.